While spices have been coveted in the past for their ability to preserve food, we use them today to enhance the flavors and color of what we eat. And because Singapore is a melting pot of cuisine, there’s a good chance that you’ve already encountered some of them at least once.

These are some of the most common herbs and spices used in all kinds of dishes: 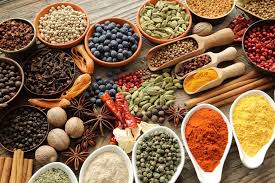 Basil
Perhaps the most relished herb, this member of the mint family has a sweet flavor reminiscent of cloves, and they can be used fresh, dried, or ground. While mostly used in Mediterranean cuisine, basil also goes great with chicken, tomatoes, eggs, fish, and pasta dishes.

Bay Leaf
The woodsy, pungent odor of the dried bay leaf means that it’s used almost exclusively as aromatics in meat dishes, but they can also be used in sauces, soups, and vegetables. Whole leaves have a shelf life of roughly a year at normal room temperature and humidity. 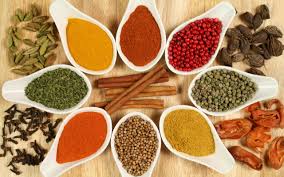 Chili Powder
You’ll be surprised to find out that chili powder is actually not just made up of dried, ground chilies, but also includes other spices, such as coriander, cumin, garlic, and oregano. The result is a red-brown powder with a mild to hot flavor depending on the types of chilies used.

Cinnamon
Cinnamon comes from the bark of the Ceylon tree, which explains why they can come as sticks other than their ground, powdered form. You can often find this spice used in sweets, hot drinks, and vegetable dishes because of its aromatic and sweet flavor.

Cumin
This essential ingredient in all kinds of dishes around the world is known for its distinct earthy flavor, and as the powdered version of the dried fruit, it’s also slightly bitter, pungent, and spicy, making this a staple in Middle Eastern and Asian cuisines. 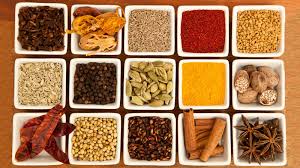 Paprika
This is the dried, powdered form of the sweet red pepper variety called Pimiento, which is notable for its mostly sweet taste alongside its spice and just a hint of bitterness. You will find paprika a must-have ingredient for cooking chicken and fish, and especially for preparing dips.

Parsley
Two of the more popular variants of this spice are curly leaf and flat-leaf (Italian), but the main distinction of parsley is that it has a slightly peppery taste. This makes its sprigs great not just as garnish, but also as an aromatic in sauces and stews.

Turmeric
Turmeric is especially notable, being used in curries and in most of East Indian cuisine, because of its earthy, slightly bitter flavor and the way it adds color to food. This is also an important ingredient in American-style mustard, as it gets its color from the spice.

(Disclaimer: this list is compiled in no particular order.)